“Speaking Of” : An eclectic houseful of fictional stories

The reader—
is swept into the undulating
current of time
to become
a traveller, a witness, a companion
to lives that have passed, and
those that are yet to be

It’s all waiting for you-
here
within these pages

This is a beautiful piece of writing.
It is observational, descriptive, thought provoking and fully realised. There is an intuitive mind at work and a subtle curiosity here that values the reader. It rewards them with a bouquet of delightful stories that beguile and charm with equal measure.”
~ John O’Regan, Journalist/Broadcaster/ Lecturer RTE/LCCR – Eclectic Celt, Ireland

“Your writing – weaves into the gardens of fine Irish wordsmiths. Yer a talented wee divil, so keep ‘dippin the pen’ and dream up more yarns, more of your lush images – that have stirred memories and emotions.” ~ Will Millar (Founder of The Irish Rovers)

“Our book club devoured Mary Murphy’s first book, ‘The Emerald Diaries’, and we can’t wait to get our mitts on ‘Speaking Of’. Mary has a way of connecting with the reader on a deep level to the point where the characters jump to life, right off the page, to sit with us as the story unfolds. The room gets very crowded.” ~ Lori K, New York Book Club 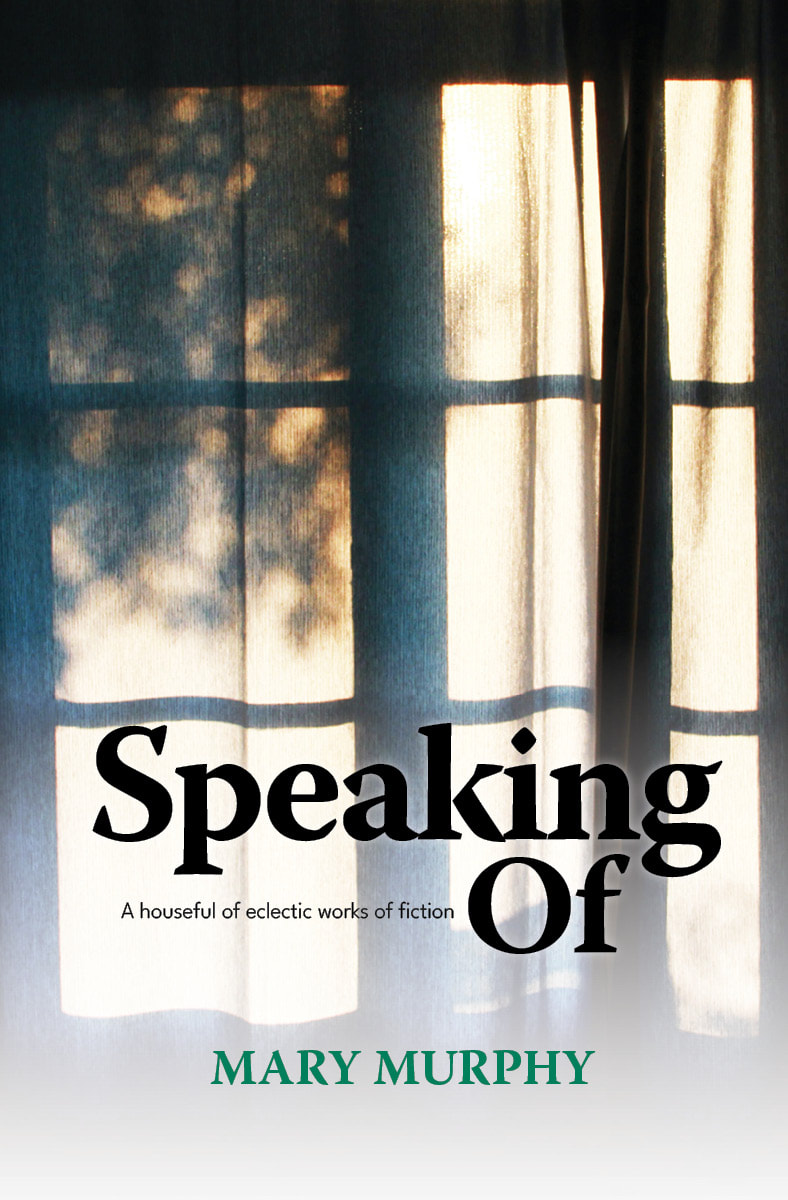 From Neala Speaks
“Life creases time into an accordion of memories – billowing and contracting as I walk the familiar path that leads to the old cottage, which lies deep, almost buried, amid the colourful crowning vibrancy of Rowan and Birch trees.”
From Resistance Speaks
Eleni balked at this. “Thirty? In one day? I’m not sure I can make that.” Nico touched Eleni’s shoulder. “Listen, we can just try. Hey, it might only be 29!” The group laughed at Nico’s usual ability to lighten the mood and Cassia added, “Don’t ask me why I have such a strong sense that we need to get there asap. Maybe I’m being paranoid, but if any of those captured give up information, we could well be doomed to their fate. We have no choice but to push beyond what we think we’re capable of. Me included. But I agree, let’s stay here, under these sweet smelling pines tonight, get a good night’s rest and get going bright and early. Would that ease your mind and body, Eleni?” “Yes, all right,” replied an appeased Eleni.
From Delilah Speaks
Mateo removed a black notepad from his pocket and walked to the woman, making the usual introductions, and asked what she was doing at her neighbor's at such a late hour. If a crime had been committed, everyone was a suspect.
From Heckie Speaks
At ten p.m., the tailor reversed his combi van to the back door of his shoppe and dragged the body along the floor. The dead man was much heavier than Heckie had imagined and moving him was surprisingly exerting. Heckie was quite sturdy himself. Not terribly overweight but wide of shoulder and bulky of midsection.
From Beatrice Speaks
…She called out again, “I said, is anybody there?” Receiving no answer, the eighteen-year-old moved forward, pushing aside one of the prickly branches to mount the four wooden steps to the front door. The sprig caught her jacket, capturing her momentarily. It took a few seconds to release her corduroy overlayer, but not before receiving a few good nicks on her index finger and thumb. Her instant response was to curse and promptly insert the punctured digits into her mouth to relieve the pain.
Previous
Next

Where did this title and these stories come from, you ask?

This is a question I am frequently asked concerning my book releases and song lyrics. Below is a brief explanation of the content within this book, should you be interested.

Speaking Of: The Title
The first story I wrote for this book was, This Black Earth Speaks. I loved the idea of those below-ground speaking. Then, I decided to introduce story titles and occasional chapter titles with ‘speaking’ as in, Neala Speaks, Delilah Speaks, etcetera. This book is muti-genre, and I soon realized this thread would be a lovely way to connect the dots, to tie the contents, even though the genres are quite divergent. Subsequently, while speaking with my daughter, Fiona, I said, “Oh, speaking of flowers … ” and a light went off. Speaking Of. There now, that is the title for my new book.

This immersive, multi-genre writer does not shy away from diversity of thought but rather embraces the challenges that it sets forth. Included in Murphy’s portfolio is the novel, The Emerald Diaries-Secrets of an Irish Clan, and a children’s fairy book series, Away with the Fairies, books One, Two and Three (prequel Adventures of Nash the Dash).

Mary is also a prolific musician. She has written, recorded and released ten full-length albums, and is co-owner of Dove Creek Recording Studios.

Her releases have been hailed as “superlative and engrossing” by reviewers and readers alike. Ms Murphy, born in Wexford, Ireland, is the mother of two grown children and lives on Vancouver Island, Canada, with her husband Paul, a dog named Norah, and a cat named Turtle.